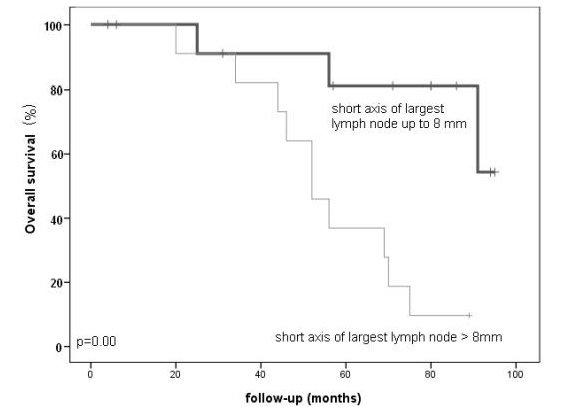 The illustration left shows the results of a study comparing Ferrotran-enhanced MRI lymphangiography (MRL) with 11CCholine PET–CT for detection of lymph node metastases. The size of the detected metastatic lymph nodes is shown on the X-axis and the number of detected nodes on the Y-axis. It is immediately obvious that Choline PET–CT is markedly inferior to MRL for detecting metastatic lymph nodes smaller than 8 mm.

Notably, up to 83% of all metastatic lymph nodes in prostate cancer patients are smaller than 8 mm, and approximately 50% of these small nodes are less than 3 mm in diameter. [Birkhauser, Eur Urol 2013; Fortuin, Eur Urol 2013].

MRI and Ferrotran: the strong basis for effective and patient-friendly treatment.

The Ferrotran enhanced MR-Imaging enables the Radiotherapist or Surgeon to target the lymph node metastases more precisely, which allows to save healthy tissue during the therapy and avoids therefore unnecessary side effects and complications for the patient. This gives the patient the chance to be cured or to slow down the metastatic process due to the targeted therapy.